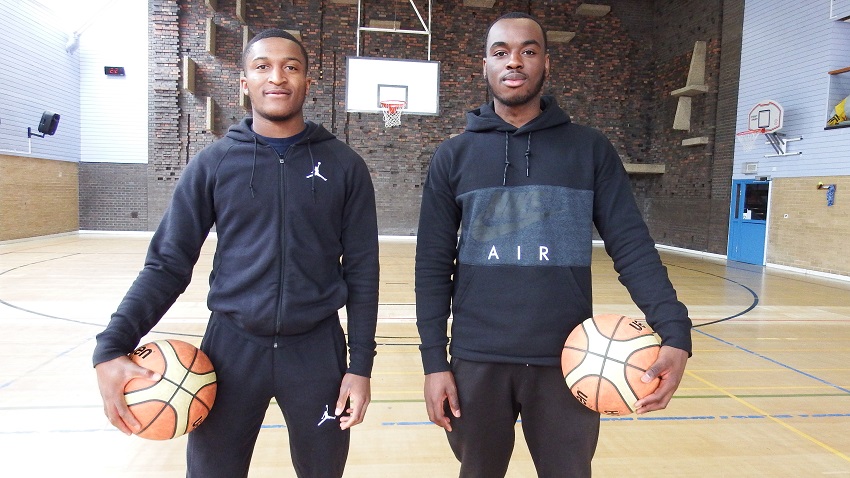 Two students from London who have spent three years training at Suffolk’s basketball academy while studying at West Suffolk College have achieved their dream of being able to study and play basketball in America.

Tomisin Olumoroti and Samuel Kesinro are now hoping the move will lead to them becoming professional basketball players, a dream they have had since they were young.

The pair have won praise from one of their sports tutors for the way they have excelled both on and off the court, been extremely popular with their team, classmates and staff as well as “humble and incredibly hard working”.

Both Sam and Tomisin were playing in the same under 16s basketball team when Bury coach Darren Johnson watched their games and chatted to them about coming to train in Bury.

As young boys growing up in Dagenham and Rainham they both played football. Then Sam was introduced to basketball by a friend and fell in love with the game. “I loved the competitiveness. Basketball is more tactical and very skilled, you play every single position”.

For Tomisin it was his cousin who introduced him to basketball and he was gripped, spending hours watching American youngsters play on the You tube channel. “Then I went out in my garden and tried to do what they do. I liked their style and they had worked really hard for it from a young age.”

For both of them the dream was to get to the home of basketball and develop their skills so they could turn professional.

Realising that studying in Bury st Edmunds could help them achieve their dream like others before them; they came to Suffolk for a week after their GCSEs. Their first impressions were seeing the countryside and “Transport is really terrible, you have to walk everywhere or have a car,” said Sam.

Their week of practising every day helped them decide that studying and practising basketball for three years would prepare them for the same at an American university so they said yes to moving away from home.

“You move away at age 16. Mentally and physically it is very tough and you need friends to keep you motivated,” explained Tomisin. “It makes you very responsible and you mature quicker,” added Sam.

Coming to the west Suffolk College/County Upper Basketball Academy meant making their home in Bury and living with host families during the week while they studied Business accounting and finance then sports science with daily basketball practise.

Both found the going tough and had to adjust to their new way of life.

They both worked hard and achieved distinction stars (the top grade) in all their studies.

Then last year they went on a trip to Iowa to play several teams at basketball. Tomisin said he knew he had to play really well in the second game in order to have a chance of being considered. He got himself into the zone, played well and was offered a place at Iowa Central University to study business accounting and play for their team.

Sam’s coach sent his highlights tape out to various universities and Genesee in New York State came back and offered him a place to study and on the team.

Both of them excitedly rang their parents but feel they do not really understand their passion for the game and how hard they have had to work to achieve this major step in realising their dream.

In both cases they get partial scholarships so they have both been working in hospitality jobs at weekends and hoping for some parental help as well as launching gofundme sites to help raise the several thousands of pounds they will each need for accommodation, living costs and some tutoring.

Sam’s fund can be found on https://www.gofundme.com/eeajg7-international-university-funds

“It’s a big opportunity for us that not a lot of people get,” said Sam.

“When people help you its important to give back,” said Tomisin. “If I make it to a pro I would come back and run youth camps.”

Lee Mandley, their course director for sport at West Suffolk college said ; “ Both young men have excelled on and off the court and truly represent the term ‘student-athlete’. They are humble, incredibly hard working, and very personable, being extremely popular amongst their team mates, class mates, and staff. For them to leave their London homes in the pursuit of better basketball and educational opportunities, and to be so independent at their age in a very different cultural setting with a slower way of life, is a real testament to them as mature and driven individuals. I couldn’t have been prouder to hear from them that they had both received offers from colleges in the US.”

Looking back on their three years in Suffolk Sam said they had to adjust to a completely different way of life - and humour. When they first started they were stared at a lot but now feel people have got used to them.

“Its tough training here but mentally it prepares me for the future and sets me up for life,”said Tomisin.

They were encouraged by older academy members who went before them and now they are encouraging the younger ones who will follow. Nick Pope, the young football player who was dropped by Ipswich Town, came to the college and trained hard to become a Premiership goalie who is now in the England squad, has also inspired them.