A former award winning radio presenter and DJ who has embarked on a Graphic and Communication Design degree has won a top prize for his video on a brand of cider.

Ric Groves, 45, is studying his BA (Hons) at the University of Suffolk at West Suffolk College and beat hundreds of entries to win a coveted Young Creative Network (YCN) Student Award. It was presented to him in a ceremony at the Barbican Centre in London attended by inspiring guests from the world of graphic design and illustration. 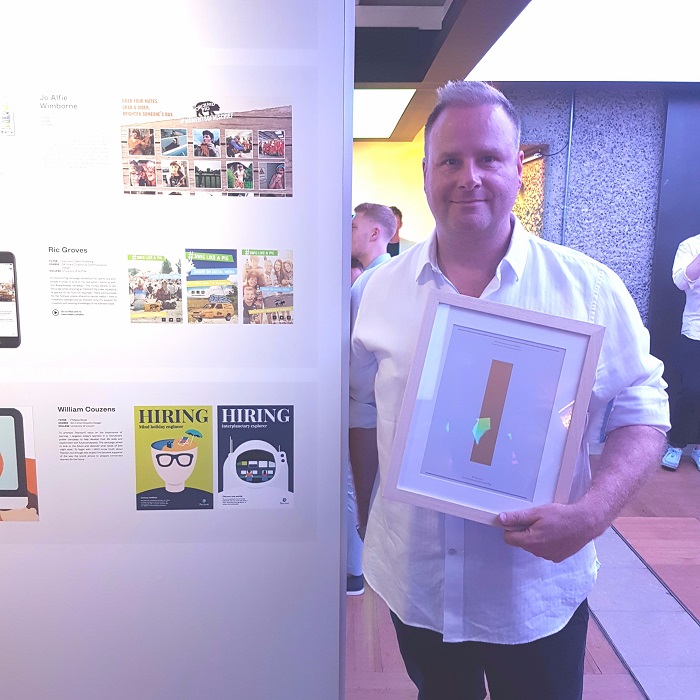 A delighted Ric, from Bradfield Combust, said; “Having always had a passion for design in many of its guises I decided to follow my gut feeling and retrain professionally in graphic design. I am on my third year and already working on projects for clients.”

Ric has worked on a number of radio stations; he won a Sony Radio Award when he worked on Kiss FM for a documentary on the history of dance music. He has also been a DJ for nearly 30 years, both here and abroad, and ran his own bars for several years.

The annual YCN creative competitions are set by big-name brands. This year they included the Royal Opera House, Quorn, Dave and Orchard Pig Cider. The awards are integrated into the second and third years of the Graphic and Communication design degree programme at the university in Bury St Edmunds.

Orchard Pig Cider wanted entries that used social media to deliver it as the only Craft Cider. Ric’s online campaign video combines a clever mix of tongue-in-cheek visuals, audience enticement and well-considered straplines. Ric was one of the few to win in the Orchard Pig category.

Mark Carter from Orchard Pig told Ric: “I especially liked your above the line focus and social media advertising campaign to drive digitally engagement with our product it really stood out from the rest of the entries. The tone of voice reflected us well as a company; bold, mischievous and inclusive, please stay in touch.”

Course Director Sian Horn, said: ‘this is the second year in a row that we have had one of our students commended by the YCN judging panel. To be awarded in such a high-profile competition is no small achievement and we are delighted with Ric’s success.”