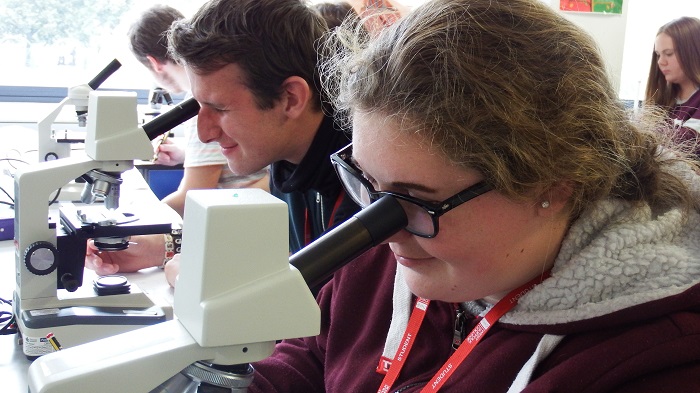 Our science students are part of an exciting, groundbreaking project to find and identify all the genes in the DNA of a global parasite, whipworm, that’s affecting 500 million people worldwide.

One group of students were part of a few select schools and colleges that went to the launch of the Genome Decoders project at the Wellcome Trust Sanger Institute in Cambridge.

The human whipworm particularly affects children in tropical areas with poor sanitation, such as Asia, Africa and South America. It causes the neglected tropical disease Trichuriasis, which leads to diarrhoea, malnourishment and developmental problems. This disease has a chronic impact on the communities affected. There is no current vaccine against whipworm, existing treatments don’t work well and are too expensive for many areas.

The yearlong project will help researchers understand the biology of the parasite. By studying the genetic makeup of the whipworm scientists can develop new treatments and preventions.

It’s the first time all the genes of a parasitic worm have been investigated. The worm is thought to contain up to 15,000 genes! Our students will be among those assigned their own section of DNA to review using innovative “bioinformatics” techniques. They will make up part of a nationwide team working on the problem. The aim will be to inform scientists at the Sanger Institute of the genes they have identified and their roles.

Students will find the locations of the genes in the genome and label them, then investigate the functions of some of these genes.

This gives students the chance to gain invaluable skills on a totally novel, real world research project, leading to an additional qualification and great employability.

Zoe Ablett, course director Level 3 Year 2 Biomedical Science commented: “The Genome Decoders project gives the students an amazing opportunity to be involved with cutting edge genetics and bioinformatics, their work will make up part of a much larger project that could ultimately save the lives of people suffering with whipworm infections. It will also give them an edge when it comes to university applications later this year.”