Students are Inspired to Win 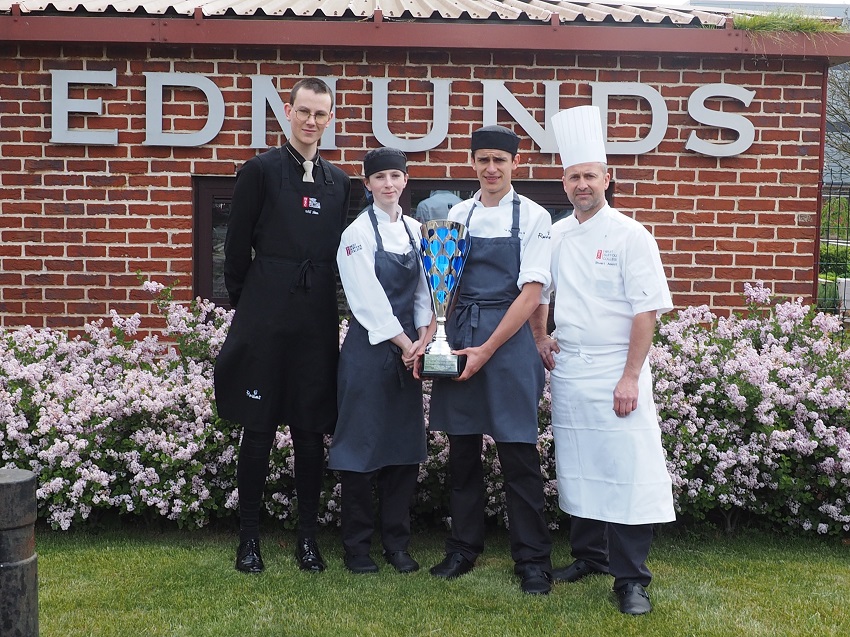 Will Shinn, Crystal Newton, Alex Cornwell and Stuart Ascott with the Passion to Inspire trophy.

A team from West Suffolk College proved they were passionate about food when their menu beat teams from across the region to win the 2018 “A Passion to Inspire” trophy.

Their outstanding catering and service means Crystal Newton, Alex Cornwell and Will Shinn will now go to the Skills for Chefs conference in Sheffield which features Raymond Blanc, John Williams and Chantelle Nicholson as well as winning a host of other experiences and treats.

The teams were all judged on their costings, cooking skills, food presentations, table design, front of house skills and the guests overall experience. For the first time in the competitions eight-year history competitors had to contact suppliers directly in order to negotiate price, understand where produce comes from and which produce was best for the dishes.

Crystal, Alex and Will were delighted with the result and said they had all been inspired by the competition thanks to their lecturer Stuart Ascott and Mentor James Carn from the Angel Hotel in Bury St Edmunds. “It was amazing,” said Will from Bury.

Crystal, from Newmarket said they were pleased to be through to the final and winning the competition was “brilliant”. Alex from Burwell said they had worked very hard on their menu.

Their lecturer Stuart Ascott commented; “Each of them were outstanding, they all worked very hard and were a very professional team. They are worthy winners and I am very proud of them”.

On being involved with" A Passion to Inspire ", chef Mark Poynton from Alimentum in Cambridge, said, “This is about getting students into work placements and giving them as many opportunities as possible to succeed. It’s also vital to show students the importance of front-of-house in the competition, as good service can help towards bad food, but nothing makes up for bad service”.

The team had been chosen earlier this year when the college, West Anglia, Colchester Institute and Cambridge Regional colleges all held in-house heats to find a team for the final.

A few weeks ago, the final four teams were invited to an Upskill day at Infusions4Chefs with renowned celebrity chef Cyrus Todiwala OBE, a regular on BBC One’s Saturday Kitchen, who also cooked for HM The Queen on her Diamond Jubilee Tour. The students spent three hours learning a variety of skills with spices and the importance of good quality ingredients, to inspire them ahead of the finals.

A Passion to Inspire was set up in 2009 by Murray Chapman to bridge the gap between up and coming students and the hospitality industry. It has raised over £200k for charities.