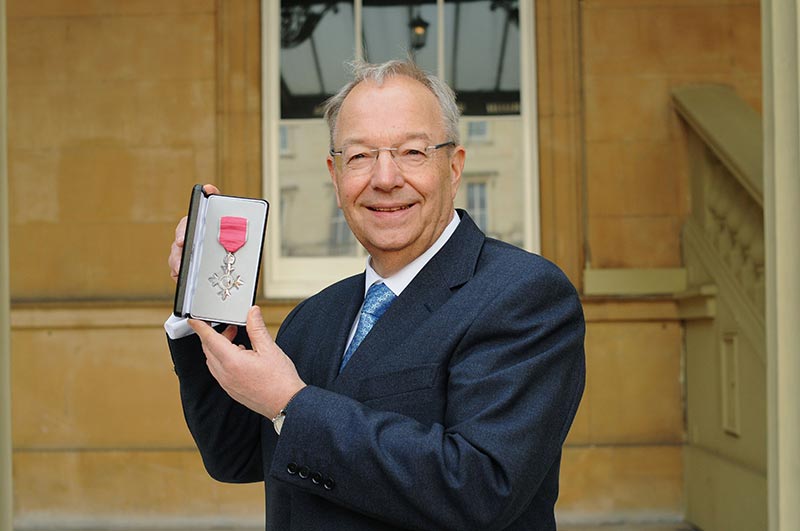 Richard Carter with his MBE which he received at Buckingham Palace from HRH the Duke of Cambridge.

Former chair of governors at West Suffolk College, Richard Carter, has received his MBE for services to education from the Duke of Cambridge at Buckingham Palace.

Richard, 63, was a governor at the college for 16 years, six of them as chair and was awarded the MBE in the 2018 New Year’s Honours. He retired from the college’s governing body last July.

Among the people honoured by the Queen in the New Year’s Honours at the recent investiture, Richard rubbed shoulders with celebrities such as former Beatle Ringo Starr, who received his knighthood, and authors Jilly Cooper and Michael Morpurgo as well as many others who had been honoured for their work with children and young people and their local communities.

“It was a very special day,” said Richard who went to the Palace with his wife, Jill, and family friends. “We were made very welcome and I had what seemed like a long conversation with Prince William as he presented me with my MBE medal in the ballroom of the palace.

“I was able to tell him something about the excellent work West Suffolk College does with the Prince’s Trust, his father’s charity that does so much to help young people who need extra help and support on their way in early adulthood.

“I hope my colleagues will see my receiving the honour as being as much about the important work that the college does as well as marking my contribution to it.”

College principal Dr Nikos Savvas said: “We are delighted that Richard has been honoured in this way. He has been an excellent governor and chair of governors, always putting students at the heart of all decisions made and taking the college forward. He has also been a brilliant ambassador for West Suffolk College promoting it as an outstanding college to everyone in Suffolk and beyond.”

Mr Carter is also chairman of the members of The Suffolk Academies Trust, which is a collaboration between the college and One Sixth Form College, in Ipswich. It aims to open the Abbeygate Sixth Form College on the site of King Edward VI School in September 2019.

He is also a member of SENDAT (Special Educational Needs and Disabilities Academy Trust), which is sponsored by West Suffolk College and Priory School Special Academy.