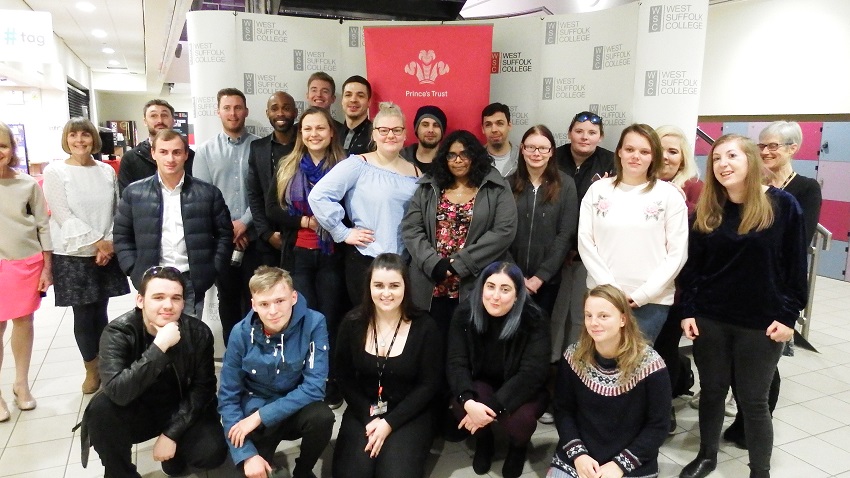 A ten year triumph celebrating more than 300 students taking part in the life changing Prince's Trust course at West Suffolk College over a decade, was celebrated with a special tea party.

In that time a fantastic £12,000 has been raised for the local community by members of 30 teams on 12-week courses. Those 330 participants over the years included seven who became East of England Regional finalists and two who were regional winners.

Among those attending the party were Dominic Crowhurst, from Bury St Edmunds, who was on TEAM 1. He had been in care and in a children's home and in his words "I fell into the wrong crowd".  Now 29 he said if it wasn't for the course he probably would have led a life of crime, but instead  he learned to deal with his anger and for a number of years has had a steady supermarket job and belongs to football, cricket and darts teams.

"I say do the course, it’s worth every minute. It made me feel appreciated and I am so grateful".

Jess Gardner, 22, from Lavenham, was only on a course at the beginning of last year.  She said she was in and out of jobs and couldn't hold one down.  Her mother encouraged her to join the Prince's Trust. "It helped me by boosting my confidence and taught me to be resilient and persevere through the bad times."

Now she has a job in a dog creche and is enjoying it.

Katrina Vingre, from Sudbury, came over from Latvia when she was 15, struggled with GCSEs in a new country and was bullied at school. She ended up unemployed for a year.

"Prince's Trust gave me confidence and I was able to take the lead and run a restaurant when a manager was not there. Now I am starting from scratch in a new store with new staff. I am so grateful to Prince's Trust, without them it would not have been so easy. "

Ola Anderson, head of proactive education, said; "We are grateful here at the college to be able to offer the Prince’s Trust TEAM programme as deliver partners for the last 10 years. The 12-week learning journey has made a significant impact in our young people’s lives towards post programme success and wellbeing in further and higher education, employment, plus family and friendships.
Thank you to all the college staff, support workers, local organisations and employers who have all contributed to making a difference for our youth."