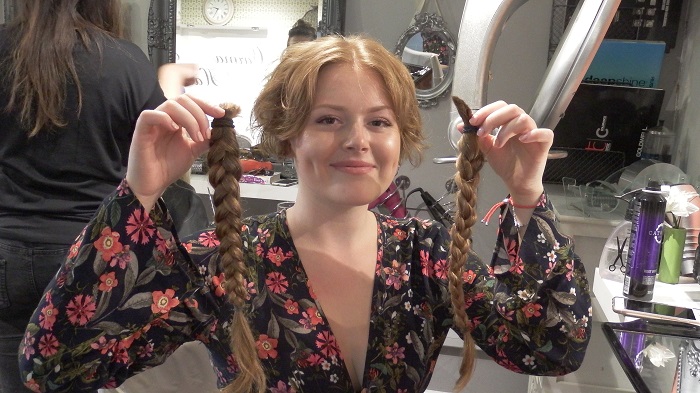 Kindhearted student Poppy Cruse brushed aside her own cancer treatment to have her lovely long locks cut off to make real hair wigs for children with the disease.

The 18 year old, who usually hates having a tiny trim, said she wanted to “give something back ”to the Little Princess Trust who are providing her with a free wig, so she was donating her hair and raising money for them.

Poppy, from Rushford between Thetford and Diss, discovered a lump on her neck at the end of May and a month later was diagnosed with stage 2 Hodgkin Lymphoma. She is about to start her second cycle of chemotherapy at Addenbrooke’s Hospital, which will be followed by several more cycles.

“Over the past couple of months mine and my family’s lives have been completely turned upside down by my diagnosis”.

The West Suffolk College student, who is studying Level 3 Applied Science, said she brought forward the appointment at JC Beauty in Thetford when her hair suddenly began to fall out.

Before her hair was plaited ready for the big snip by her hairdresser Carlie Vincent, Poppy said: “It’s more stressful with my hair falling out, at least now I get it all cut off I don’t have to worry about my hair.” After Carlie snipped off the long plaits a surprised Poppy was delighted with the result: “I actually quite like it like this,” she exclaimed.

When she first set up her Justgiving page Poppy hoped she would collect £900 to cover the cost of the charity making a free wig for a boy or girl, but it has already reached around £4,000.

“I am completely overwhelmed by everyone’s generosity and support, I really didn’t think I would raise that much.”

Her mother Janet, who watched the haircut take place, and knows her daughter hates even having her long hair trimmed, said: “She’s been really positive about it all, even though we had to bring it forward suddenly because her hair started falling out. Because we know the hairdressers it’s been less traumatic and I think she looks terrific.”

When it was all over and Poppy saw her final short haircut she said it wasn’t as traumatic as she thought it would be. ”I like the final look so I feel really good about it.” She is now planning to have it cut even shorter in a couple of weeks’ time.

Anyone wanting to support Poppy and give to the Little Princess Trust can read her story and donate on her page www.justgiving.com/fundraising/poppy-cruse