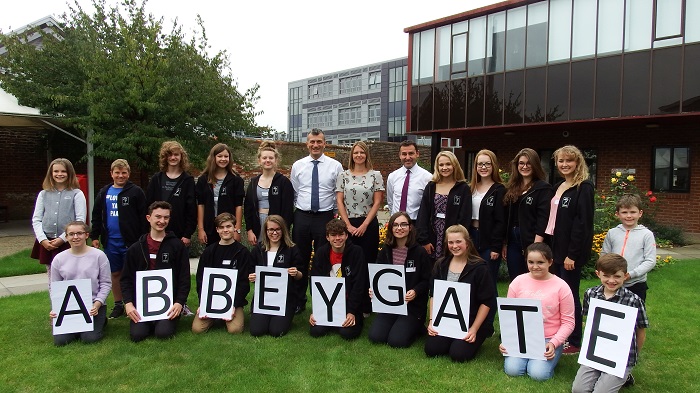 The name was determined by a public survey and through consultation with pupils from King Edward VI School, Newmarket Academy, Stour Valley Community School and Sybil Andrews Academy.

Jenny Rodgers, Project Manager for the new sixth form said “Thank you to everybody who took part in the consultation, it was a fantastic community exercise which resulted in a name befitting our brand new sixth form college. ‘Abbeygate Sixth Form College’ was favoured for being a traditional name with a clear link to Bury St Edmunds.

The Abbey Gate in the centre of Bury St Edmunds is a 14th century gatehouse and is one of the best surviving examples of its kind. It was designed to be the gateway for the Great Courtyard and thus for us symbolised the ‘gateway’ to success and achievement our new sixth form will offer the young people of this community.”

She added, “In autumn we will launch an exciting design competition for the sixth form’s new brand and logo. The competition, which is kindly being sponsored by Ipswich based Design Agency, Trebuchet, will be open to secondary schools and colleges in the area. We will share more details about this in the next few weeks”.

It will be run by the Suffolk Academies Trust, which stems from a unique collaboration between the outstanding One Sixth Form College in Ipswich and West Suffolk College. The sixth form will offer in the region of 40 A-Levels plus a number of enrichment and extra-curricular activities and partnerships with business and industry to ensure students reach their full potential and progress to prestigious universities and maximise their future career prospects.

Abbeygate Sixth Form College is expected to open its doors to 700 students in September 2019 and rise to 1,700 by its fifth year.