Conor is Going for Gold 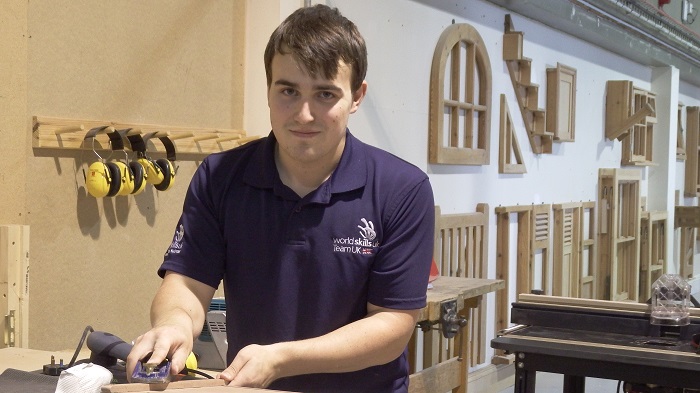 When Conor Willmott joined a West Suffolk College carpentry course at the age of 15 he had no idea it would lead to taking part in an Olympic style competition against people from 77 countries and regions around the world.

Conor, 20, from Bury St Edmunds, has already travelled to China, Australia and Sweden and will be taking part in the joinery section at World Skills in Abu Dhabi in October, hoping to win a gold medal. The events aim is to showcase and inspire world-class excellence in skills and introduce young people to a variety of skilled careers.

“It’s a dream come true”, said Conor, who will be part of a 34 strong entry from the UK, flying out to take part in the 45th World Skills competition that is held every two years.

Conor spent three years on the Milburn Campus at college learning carpentry, the same trade as his dad Stewart, “It’s in my blood,” he explained. After joining, he quickly became an apprentice and went on to gain his Level 3 Diploma as well as an NVQ.

It was in his first year that his employer saw the SkillBuild competition advertised and Conor entered. He was the only Level 1 entrant so he was moved into the senior section - and beat them! The following year he came top again and gained enough points to compete in the national finals at the NEC.

Once again, Conor’s joinery skills came out top as he beat ten other competitors, and in 2016 he travelled to Sweden for Euroskills. Although he did not win in Gothenburg, he used it as a training exercise and then went through the UK team selection process determined to do well. In his words he “blew the opposition out of the water” to be chosen for the World Skills competition.

A trip to China, where Conor says the competitors train every day, six days a week, has helped him practice in searing heat, ready for the United Arab Emirates. The Australian team came over here to act as competition when the UK selection process was taking place and Conor,and other members of the team, went to Australia for two weeks in return. He was delighted to beat the Australian joiners.

To improve his chances he is training three days a week on the college’s Milburn Campus and working for the other two. ”Being in the college workshop will better my chances as I can practise my techniques”.

“The lecturers at West Suffolk College have always been brilliant. I am incredibly grateful to the college and the support they are giving me now. Being able to practise here will better my chances and help me with my techniques. For the competition, I have to be better than industry standard. ”

Lecturer Brian Tonbridge said: “We are delighted that Conor has come so far in the competitions he has participated in and incredibly proud that he will be representing the UK at World Skills. Conor has attended West Suffolk College for five years, three of these as a joinery apprentice. He has had to work hard to develop and hone his skills but his success at regional, national and European levels so far speaks for itself. Conor is a credit to the trade and we hope that his enthusiasm and success will inspire the next generation of joiners.”

Competitors in subjects as diverse as cookery, jewellery, architectural, mechatronics, hairdressing, aircraft maintenance and web design, will all fly out on October 10th ready for the competition’s start on October 14. They will be among more than 1,000 from all over the world. Conor says they will be working in a giant tent in the pit lane stretch of the Grand Prix circuit. Three lorries will power air conditioning to bring the temperature down from 44 degrees to 24 degrees for the competition.

His parents Angela and Stewart are going to watch him. Mum, Angela said ”We are massively proud and behind him one hundred per cent. We go to his shows and we are going to Abu Dhabi for World Skills, we can’t miss that!

“From the age of six we knew where he was headed. My husband was self-employed and we extended our house and every time his dad did something he was there or he would give Conor little tasks. He is very confident and as soon as the competition starts, he switches off everything, then when he finishes he is a different Conor, he’s so focussed.

“Him and his dad have their moments, jesting about who can do things better. We both hope Conor gets a gold medal.”

Not only is Conor determined to do well he hopes to start his own business and to encourage other young carpenters taking part in the SkillBuild competitions by becoming a Skills Show champion.

Already West Suffolk College student Thomas Pawlowski is hoping to follow in his footsteps as he won the gold medal for painting and decorating in the regional heat and will be taking part in the national finals at the NEC in November.